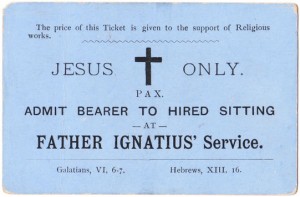 Admission ticket to one of Fr Ignatius’s mission services

Fr Ignatius (1837-1908) was a prominent figure in the Catholic Revival which swept the 19th century Church of England.  As a young man he resolved to restore to it the monastic life lost at the Reformation, and devoted the rest of his life to this aim.

Ordained deacon in 1860, he served a brief curacy at St Peter’s, Plymouth, where he came under the influence of the Tractarian éminence grise, E.B. Pusey, and Priscilla Lydia Sellon, foundress of one of the first Anglican women’s communities.  His attempt to establish a ‘Brotherhood of the Love of Jesus’ was thwarted by illness, but after convalescence in Belgium and a six-month second curacy in Stepney he founded the ‘English Order of St Benedict’, in rooms lent by the Reverend George Drury in his rectory at Claydon, near Ipswich.

At the same time he embarked on a parallel career as a preacher of missions.  Originally undertaken to publicise his monastic venture and raise funds to secure suitable premises, this soon became Ignatius’s chief occupation, and made his name a household word.  It remained the principal source of income for his Monastery until the final year of his life, but being left for months at a time without adequate leadership the community never developed to its full potential.

Fr Ignatius combined an extreme taste in ceremonial (much of it modelled on what he had witnessed in Belgium) with evangelical earnestness in the pulpit – he often got on better with Low Churchmen and ‘Dissenters’ than with Catholic-minded Anglicans.  His relationship with the Church authorities was consistently stormy: no bishop would advance him to the priesthood, and towards the end of his life he excited considerable controversy by accepting priest’s orders from an episcopus vagans, Joseph René Vilatte.  Ignatius was however a man of deep spirituality, whose face when he prayed was reported to shine with heavenly light.

Brother Placidus And Why He Became A Monk   Father Ignatius O.S.B. (Bray 1871)