The Monastery was founded in 1870 by Fr Ignatius with the aim of restoring monastic life to the Church of England, and it remained in monastic use for over forty years. Eric Gill, the sculptor and typographer, lived there from 1924 to 1928. It has been owned by the Knill family since 1986. Usually the Trust holds an annual pilgrimage to Llanthony and Capel-y-ffin including an optional 3½ mile walk from Llanthony to Capel-y-ffin along the eastern side of the valley. Unfortunately this year’s pilgrimage had to be cancelled because of the coronavirus pandemic (see the News page for details of our ‘virtual pilgrimage’).

The Trust objectives include the care of Ignatius’ ruined abbey church, and the nearby Wayside Calvary and statue of Our Lady, as places of pilgrimage, prayer and worship. Although the church is is now structurally unsound and unsafe for public entry, it remains a focus of the annual pilgrimage.

There is a collection of Father Ignatius Memorial Trust archive material at Abergavenny Museum. We have also made some documents and articles available on the website on the Documents page.

How you can help

We aim to keep the memory of Ignatius alive and to continue the annual Pilgrimage. You are warmly invited to make a donation and to become a Friend of the Father Ignatius Memorial Trust by subscribing to the Trust Newsletter. 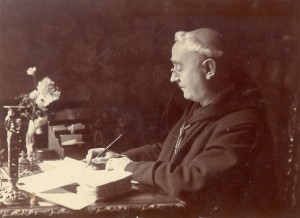 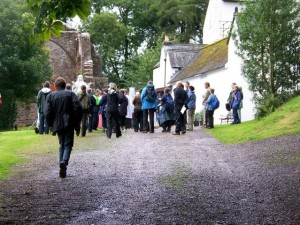 Fr Ignatius OSB (Revd. Joseph Leycester Lyne, 1837-1908) was a prominent figure in the Catholic Revival which swept the 19th century Church of England.  As a young man he resolved to restore to it the monastic life lost at the Reformation, and devoted the rest of his life to this aim.

A Virtual Pilgrimage to Llanthony & Capel y Ffin to replace the physical experience which had to be cancelled this year due to COVID-19. We begin at St David...

This year's Pilgrimage -- due to have taken place this coming Saturday -- is being conducted "virtually". Copies of the programme have been sent to all on our mailing list; for any who have missed out they can be sent by email on application to the Hon Secretary (daviespll@hotmail.com). ... See MoreSee Less

A journey to the Vale of Ewyas.Newman Hall: Sunday 9th August.Though I should be in bed sleeping, the truth is that here in the chaplaincy it is too hot and humid to even hope for sleep at the moment. So, before continuing with prayers, I would like to share the joy of the last few days - joy that is the fruit of pilgrimage.Up until recently our movements have been curtailed, and here in Wales pandemic precautions have lasted longer than on the other side of Offa’s Dyke and pilgrim journeys have been on hold.For many years it has been our tradition to honour St David with a March pilgrimage to Llanthony Priory in the Black Mountains, where the ruins of an Augustinian house occupy the site of a Celtic foundation, linked to the monastic settlements founded by St David.Regrettably, the uncertainty of the situation in March this year made it impossible, and so we looked forward to making a pilgrimage in the summer months.Unexpectedly, Friday became the day for that pilgrimage, and it was wonderful to journey to Llanthony under summer skies, with the last few miles from Llanfihangel Crucorney to the priory so different to our usual March experience.Rather than passing along the Vale of Ewyas through bare hedges, and under leafless trees, dappled shade covered our slow progress as we wound our way along the hedge-bound lanes and followed the shallow, stony river to the priory ruins, nestled in a curve of the steep-sided valley, with the Black Mountains around us and Herefordshire just beyond the ridge.Roadside flowers, now dusty in the late summer brightened the hedgerows, the blackberries and sloes ripening, and rain-washed wool caught among the branches. The bleating of sheep surrounded us, close by in the meadows beside the river and high on the sides of the valley.Despite the walkers and visitors, there was a great sense of peace and little noise in the ruins, so that attention could be held by the swallows swooping between the arches and the robin who had the good sense to know that every visitor held the possibility of food.The pink hued masonry of the ruins was baked in the sun, and stones in local walls and buildings attested to the use of the priory as a quarry as locals who, robbed of monasteries and the saints by the reformation, quickly forgot the spiritual meaning of the priory ruins and the holiness of the place.Although the ruins are diminutive in comparison to the likes of Glastonbury, it is hard to imagine how the house was sustained by four Augustinian canons echoing around the church and cloister on the eve of the dissolution.The monastic life and services vanished from the valley for four and a half centuries, returning with the eccentric and romantic Father Ignatius of Llanthony, who established his neo-Gothic abbey nearby at Capel-y-ffin, the last Welsh-speaking community in that part of Wales, and struggled to return Benedictine monasticism and catholic tradition to the Church of Wales. After Fr Ignatius’s death, the few remaining monks joined the Caldey community and the abbey buildings eventually passed into the hands of Eric Gill, the sculptor and typographer.Finding the parish church on the site of the first priory locked, we headed to Capel-y-ffin, knowing it’s tiny church would be open, as always. As we continued our journey along the very narrow lanes, the tops of the trees flanking the lane touched each other in many places, creating a tunnel of green for those heading up the valley.There, in its small churchyard, with its slanting old grave stones, behind the seven old yew trees, the doll’s house church squats, as the diarist Francis Kilvert described as ‘the old chapel, short, stout and boxy, with its little bell turret, squatting like a stout grey owl among its seven great yews’.Through the clear-glass panes of the east-window, beyond the etched words of Psalm of Psalm 21 – ‘I will lift up mine eyes unto the hills, from whence cometh my help’ – the green hills are the altar-piece for the simple sanctuary.In the unadorned, 18th century interior, the icon over the votive candlestand was a reminder that in 1880 local children claimed to have seen the Mother of God in the meadow below the monastic church. The intense peace and tranquillity was a call to prayer, and we responded with a moleben to the Mother of God, chanting our prayers before the icon -‘Stretch forth thy hands, with which thou didst receive the Master of all as a babe. In thy goodness forsake not us who ever put our trust in thee. In thy prayerful vigilance and boundless forgiveness have pity on us. Grant our souls thy loving-kindness that floweth throughout the ages. For we sinners have thee as our defender against evils and adversities. As thou possessest bounteous compassion hasten to intercession, and speed thou to make supplication, O thou who dost ever help them that honour thee, O Mother of God.’After our prayers, we crossed the shallow river to the 18th century Baptist Chapel, and climbed along a stream-bank to the ruins of the abbey church, where the mortal remains of Fr Ignatius rest in the choir.Long before the events following the coming of Fr Ignatius and his raggle-taggle band of monks and followers, Capel-y-ffin, ‘the chapel on the boundary’, had been at the centre of spiritual life for those living at this end of the valley.When we left the hamlet, the wonderful peace of the place seemed to go with us, with the blessing of the Mother of God, who continues to be loved and called upon by pilgrims in the isolated church among among the yew trees and beside the ruins of the 19th century abbey church.Most Holy Mother of God, Our lady of Capel-y-ffin, save us and preserve us beneath thy most pure veil! ... See MoreSee Less

Good to see something happening just across the border. I'm sure nearby Welsh visitors would be welcome. ... See MoreSee Less

PLEASE BECOME A FRIEND OF THE TRUST

The Trust needs funding to help care for the Abbey Church, the Wayside Calvary and the statue of Our Lady, to aid production of the Trust Newsletter and to allow the annual Pilgrimage to continue.

To contribute, please see the Help Us page – your subscription &/or donation will be much appreciated.  The Father Ignatius Memorial Trust is a registered charity (Charity Commission Registration Number 253225).