Below: Dedication of the Wayside Calvary on 30th August 1936

Below: Pilgrimage scenes in recent years 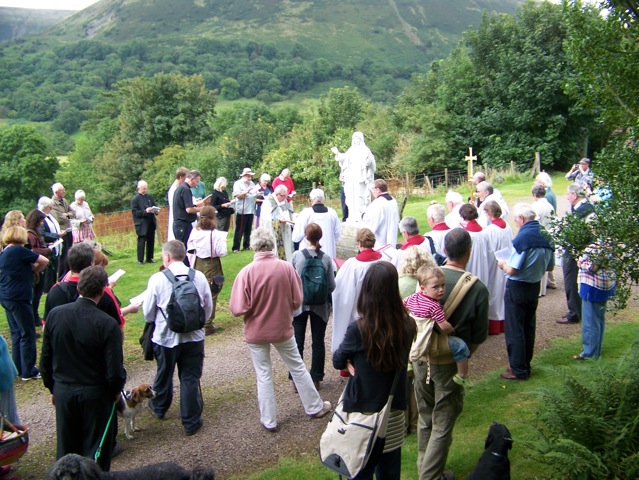 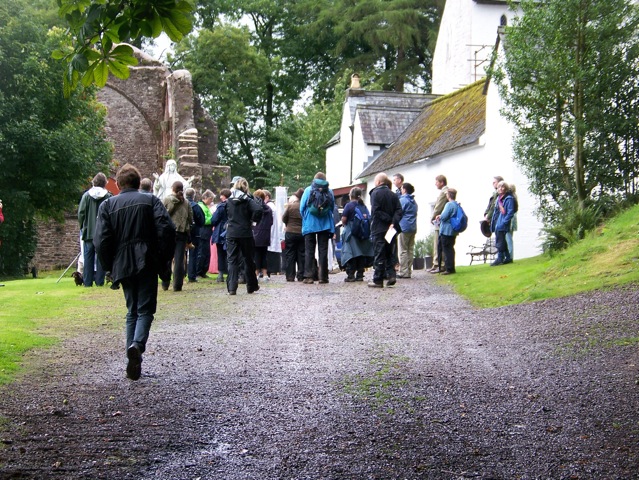 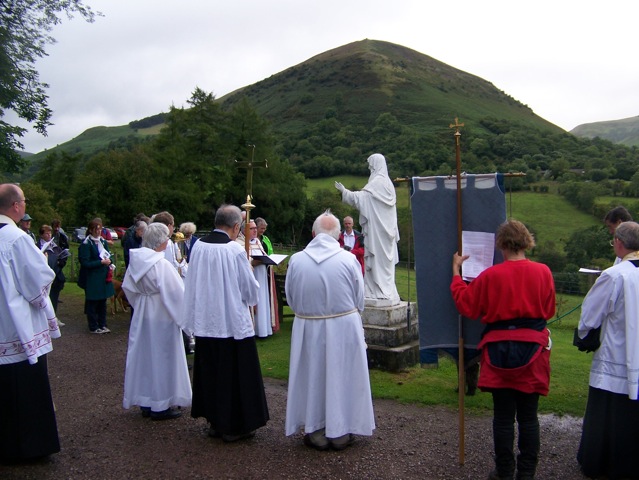 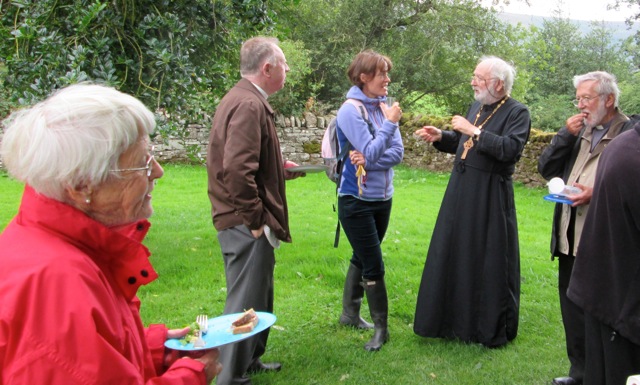 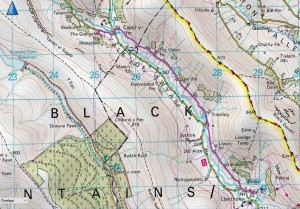 (click on map for larger image; use back button to return) 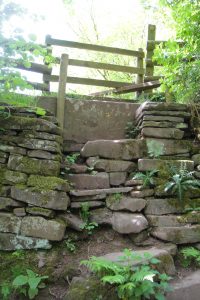 Stile near the Gwent-Powys border on the Pilgrimage walk route

The next Father Ignatius Memorial Trust Pilgrimage is planned to take place on Saturday 20th August 2022.

On 30 August 1880 strange events took place at the Monastery.   The focal point of the abbey church was the high altar with its lofty reredos and magnificent tabernacle for the reservation of the Blessed Sacrament, the ‘shrine of perpetual adoration’.  That morning 20-year-old Brother Dunstan was kneeling at a prayer desk in the centre of the church taking his turn at the daily ‘watch’, when he saw the monstrance containing the Host appear on the altar in front of the tabernacle door.  Later the same morning Janet Owens (an associate sister) had the same experience, but thought the Sacrament ‘had been left out for some reason’.

In the evening the four ‘monastery boys’ were playing in the meadow below the Monastery buildings when they were startled to see a female figure apparently gliding across the surface of the field.  They identified the figure as the Blessed Virgin Mary, and the apparition was seen on three further occasions over the following two weeks – on the final day by Fr Ignatius himself, who had not been present on the earlier ones.

Devotion to ‘Our Lady of Llanthony’ quickly took root.  The anniversary of the first apparition, 30 August, was chosen as her special festival, when the abbey church would be crowded with pilgrims from far and wide for High Mass, many of them having walked the eleven miles from Llanfihangel Crucorney station or over the mountain from Hay.  The day ended after Vespers with a procession to the site of the ‘holy bush’.  This was where the mysterious figure had been seen to alight; eventually a commemorative statue was erected on the spot, the same one that now stands on the Monastery forecourt.

During Eric Gill’s occupancy the statue was removed to All Saints’ in Hereford where it remained until the late 1960s, when it was returned to the Monastery forecourt.  Meanwhile a small piece of land opposite the site of the apparitions was acquired by Hilda and Irene Ewens, daughters of Fr Ignatius’s sister Harriet, and a wooden Calvary installed.  A congregation of fifteen hundred assembled in the adjacent meadow for its dedication on 30 August 1936, and for several years the date continued to be marked by an outdoor service in the same field.

An impressive icon of ‘Our Lady of Capel-y-ffin’ painted by Aidan Hart is enshrined in St Mary’s Church, Hay-on-Wye.  A small copy hangs in the church at Capel-y-ffin, where candles may be lit and Our Lady’s intercession invoked.

Our Lady of Capel-y-ffin by Aidan Hart

In August 1972 the centenary of the Monastery was celebrated at an event organised by the Father Ignatius Memorial Trust and attended by some four hundred people.  It began with a procession from Capel-y-ffin church to the Monastery, with ‘stations’ at the Memorial Calvary and statue, during which the Lourdes Hymn was sung to the accompaniment of the Abergavenny Borough Band.  Evensong followed in the ruined church, at the end of which the blessing was given by the Abbot of Nashdom (the Rt Revd Dom Augustine Morris), at that date the only Benedictine abbot in the Church of England.

Much the same order has been followed every year since then, with minor modifications. The link between ‘new’ and ‘old’ Llanthony was recognised when in 1975 the Trustees helped to organise an ecumenical celebration of the 800th anniversary of the foundation of the former Augustinian priory at Llanthony.  Since then an Anglican Eucharist has been celebrated in St David’s church adjacent to the Priory ruins as part of the Pilgrimage ; after this many pilgrims complete the journey from Llanthony to Capel-y-ffin on foot.

The Pilgrimage is an inter-church event to which all are welcome, and the afternoon pilgrimage service can vary from year to year e.g. from an Anglican Evensong to Orthodox Vespers or the office devised by the Ecumenical Society of the Blessed Virgin Mary.  Given the poor state of the abbey church fabric, this service currently precedes the procession to the Monastery and takes place in the little church at Capel-y-ffin.

There is usually a guest preacher at this service.  In recent years these have included the Bishop of Swansea and Brecon (2005) and the Provincial Assistant Bishop of the Church in Wales (2006), the Principals of St Stephen’s House, Oxford (2008) and Pusey House in the same city (2009), the Archdeacon (now Bishop) of Monmouth (2010) and the Abbot of Belmont (2011), as well as several of the Trustees.  Numbers rarely approach those of the ‘glory days’ of the 1970s (let alone those of the 1930s), but many of those who take part have been coming faithfully for many years.  However, it is always good to see new faces!

The pilgrimage is normally held on the Saturday of the weekend preceding the late summer bank holiday.  The date and other details are always given in the annual Newsletter of the Trust, as well as on this website: see the News section for details of the next pilgrimage.

The Llanthony Pilgrimage Prayer is based on the prayers said by Fr Ignatius before preaching, and can be viewed or printed out here.  Llanthony Pilgrims and Friends of the Father Ignatius Memorial Trust are invited to keep in mind monthly intentions for prayer through the year listed here, and to remember those causes dear to the heart of Fr Ignatius, still of pressing importance to the Church today, including the renewal of community and monastic life in the Church and the reconciliation of divided Christians in the faith and practice of the undivided Church.

After a ‘bring & share’ picnic lunch, the walk starts out from St David’s Church at Llanthony and follows the route shown on the map above along the eastern side of the valley for about 3½ miles to Capel-y-ffin. The way can be very muddy, especially following rain, and there are some large stone stiles to negotiate towards the end of the walk. Stout footwear and waterproof clothing are advised, and it is wise to carry water particularly if the weather is hot.